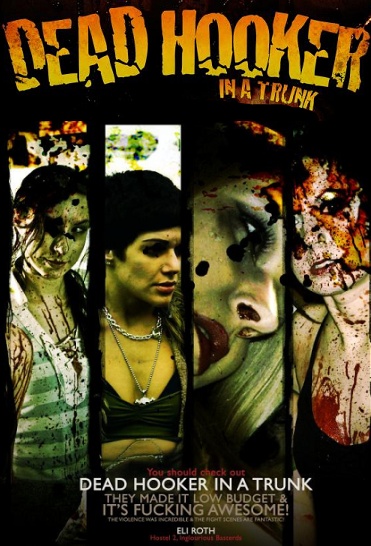 “It must suck to be in the trunk”
I come across a lot of films, some good, most bad, and every once in a while, a true gem, a movie that you can’t conceive of your collection without owning. When I first heard about twisted twins productions and “Dead Hooker in a Trunk”, I was, of course curious. What I got was better than I thought a title like that would deliver. 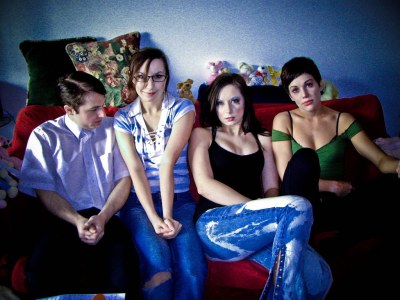 The film opens with an introduction to our little archetypical girl gang at a dive club juxtaposed with the murder of a blonde girl in a red dress. The Badass (Sylvia Soska), the hot, rough around the edges decision maker, the Geek, (Jen Soska) her too good for her own good twin sister, and the Junkie, a vocalist and sorta the bane of the group. After a night of partying, the geek asks her sister to pick up her friend, Goody two shoes from his youth group on their way to score some drugs for the Junkie. It seems like just another day in a mundane existence except for one thing, there’s a dead body in the trunk! This sets the four off on a mission to dump the body and find out why it’s there in the first place. With several interested parties eyeing their every move, it’s only a matter of time before something bad happens. This film is an exploitation fanatic’s dream feast with all the fixings, Including, but not limited to eye gauging, pseudo amputation by chainsaw and Semi truck, electrical tape eye patching, rag doll limb attachment and a cowboy pimp!

Written, produced and directed by twin sisters Sylvia and Jen Soska, Dead Hooker in a Trunk plays like a memory from my bad boy punker days. No, I never found a dead body in the trunk, hooker or otherwise, it just feels authentic and real. They remind me of people I knew. Not just personality wise, but the way they lived as well. That is the first hurdle to overcome, a personal connection with the viewer. These girls are interesting and the dialogue is fun. They even go through a catharsis, both personally and as a group. The film’s characters are named after archetypes but are anything but one dimensional. Though the situation is way out there, the journey each character takes is grounded by real emotion. Another trap that filmmakers fall into early in their careers is that males can do the violence but have trouble writing dialogue and emotion, where females have problems with the opposite. Let me tell you, these girls got it down. Their tough as nails attitude never feels fake or forced like some other actresses in much bigger productions.

It is often referred to as “good for a no-budget film” Whatever that means. I hate that phrase! I feel statements like that devalue a film. Is a perfect film? No, it has its flaws as many do. What it is though is honest in its intentions and love for the genre that is hard to pull off with true sincerity.  Sylvia and Jen kept a copy of Robert Rodriguez’s book “Rebel without a crew” on hand at all times and it pays off. They don’t come off as armatures or weekend filmmakers. There is a polish not often found in a debut film and that says something about these two, especially since they did it alone. What people should be saying is it’s an excellent first feature and where will they take us next? See this film. It’s a great party movie to be watched with pizza, beer and a shot. I’ve got mine!